Shop By Most Popular

Learn all about fire pits and what you'll need for your own setup.

Discover the basics of custom fire pit features and start designing your own.

Choose from the best selection of fire pit products for your project.

Montana Fire Pits based in Missoula, Montana. We are a small, family-owned business. We love working with real people and have real experience with fire pits.

Everyone has a great story about an experience they have had around a cozy fire.

Who We Work With

Learn about best practices and common tips to help your build process.

See Our Tips and Tricks >

Need something custom? Let us help you figure things out.

There are a number of options out there when considering what kind of fire pit burner you want. Each of them comes with a number of qualities and effects. Let’s take a look at the different options for fueling your fire pit and why we think that natural gas or propane is the best choice. 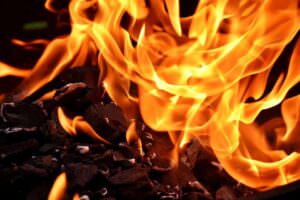 Wood burning is the oldest method of creating fire. It is as if the feeling of a wood fire is coded into our DNA. While the beauty of a wood fire is certainly unmistakable, wood burning comes with a few byproducts that should be considered. Simply put, wood takes up a lot of space, needs to be stored out of the rain, and requires a good amount of effort to cut and cure yourself. Of course, you can purchase pre-cut and pre-cured wood but you will be paying a premium for it and still have the storage issue.

Furthermore, wood fires cause smoke and embers while gas fire pits do not. Many states banned wood burning fire pits due to the possibility of an ember flying off the fire into dry brush to create a forest fire. Gas fire pits do not produce embers and burn clean, which means they do not produce smoke and produce less harmful byproducts when used. However, given that wood is a renewable resource, your effect on the environment when using wood as fuel uses fewer resources. 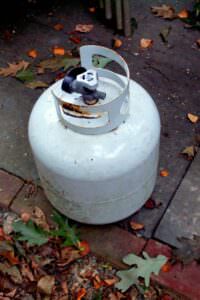 Propane is a clean-burning substance that exists in a gas state at normal temperatures. It is a liquid at cooler temperatures and is created by natural gas processing or petroleum refining.

Given its compressible form, propane is commonly stored and transported in tanks between 5 gallons to 100 gallons. Given that it is clean burning, it does not produce harmful emissions past carbon monoxide and carbon dioxide, which it produces in lower amounts than gasoline. As soon as propane is released into the air, it transmutes to a gaseous state. However, given its relatively higher density than air, it can pool into your fire pan if there is not enough ventilation. Propane does produce higher BTUs with less fuel than Natural Gas, however, it is about 6 times the cost.

Natural gas is a natural substance that forms as carbon life forms are broken down and released through vents in the earth’s crust. Natural Gas has less density than air and tends to rise, which negates the risk of pooling fuel at the bottom of your fire pit. However, Natural Gas is odorless so it is more difficult to detect a leak than propane.

Given its tendency to rise, natural gas is easily transported through gas pipes into houses and fire pits. At 1/6th the cost of propane, it might seem like natural gas is the obvious choice. However, Natural Gas only produces about 1,000 BTUs from the same volume that propane could produce 2,500 BTUs.

In the end, most people make the decision of fuel for their fire pit based on the convenience of the fuel storage and transportation. If you live on a property with plenty of room and trees, then a wood burning fire pit might be for you. If your house runs off of a large natural gas or propane supply, then it might be easier to cut into that fuel supply instead.

Make sure to choose the right burner as the velocity with which the fuel must be delivered will change dramatically between propane and natural gas. Finally, consider keeping a small propane tank somewhere near your fire pit and running a fuel line to it. Just remember that the tank of propane will only fuel your fire pit for so long before needing to be refilled, while a natural gas line will continuously flow as long as the house is supplied. Happy choosing!